Ex-Formula 1 racer Romain Grosjean says he's made "good progress" in becoming accustomed to the driving style necessary for IndyCar, after a solid day of testing at Laguna Seca.

Over the course of 106 laps, Dale Coyne Racing's Grosjean ran five sets of tyres, with the team having the rookie practice going fast while fuel saving, saving fuel when running at safety car speed, and making pitstops.

Grosjean, for whom this was only his second IndyCar test, following his initial foray at Barber Motorsports Park last week, ended the day third fastest of the eight drivers participating at WTR Laguna Seca.

"Pato O'Ward was fastest, and then my team-mate Ed Jones pipped me by a couple of hundredths at the end, but there's more speed in there," Grosjean told Autosport.

"It's only testing and there were only seven other cars here. So it's great that we're in the game, but I'm not reading too much into it.

"The important thing is that we definitely learned a lot and I'm definitely getting better. I think we've made some progress. I'm starting to understand the car better.

"If I'm honest, it's very different from Formula 1, the way you drive it. But I'm getting up to speed and feeling more confident in it, more comfortable.

"We made a fair amount of setup changes and I felt how they work, so we're getting there. I feel like I'm learning what the car needs to go fast and how I need to drive it." 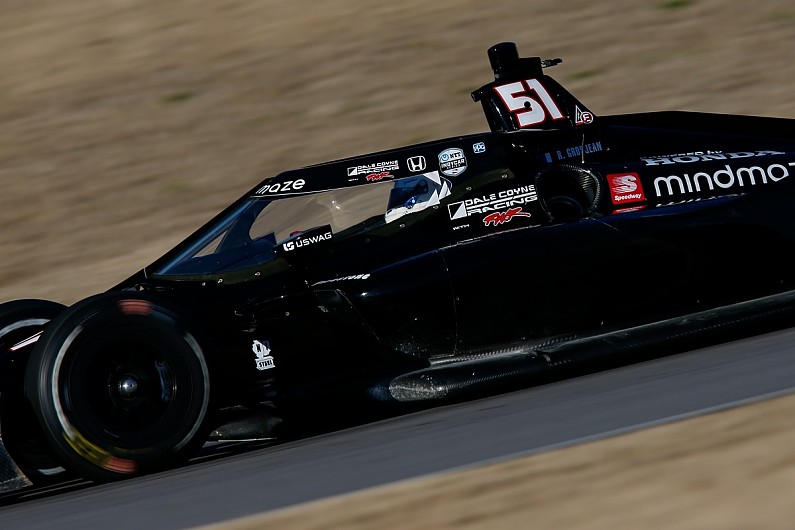 Grosjean heaped praise on the facility itself, having wanted to try this classic 2.238-mile track in Monterey ever since encountering it in a video game previously - with that knowledge actually proving useful to him, he admitted.

"First of all, driving Laguna Seca in an IndyCar is absolutely outstanding," he said.

"It's one of the tracks I really wanted to drive in my life and so it was going to be a good day, anyway.

"But some of the lines I had used in the game, I was a bit skeptical about, to be honest - and actually they turned out to be right!

"Obviously, video games are still only games and they're never going to be as good as a professional simulator, but they do a good job, and for learning a track they're quite useful."

McLaren's Juan Pablo Montoya continued his Indianapolis 500 preparations in eighth spot, 0.926s off the pace, with Helio Castroneves (Meyer-Shank Racing) 1.5s off the lead in seventh.