Mahindra Formula E driver Alex Lynn has provided an update on his condition following a horrific crash in the Diriyah E-Prix, revealing he's "100% fine" and has escaped injuries.

Lynn was fighting for 14th place on Lap 26 of 29 with the Jaguar of Mitch Evans when the pair came to blows on the long back straight after Turn 17.

CCTV footage released by Formula E showed Lynn's Mahindra launching over Evans' car and turning upside down, before skating off the track and over the run-off areas at Turn 18.

After his car came to a rest, the British driver was immediately taken in an ambulance to a hospital where he was accompanied by Mahindra Racing's team principal Dilbagh Gill, but was discharged the same night after the results of the CT scans were out.

The race itself was put under FCY in the immediate aftermath of the incident, before a full safety car was deployed.

After a prolonged interruption, a decision was made not to restart the race with three minutes left on the clock, with Lynn's former Virgin Racing team-mate Sam Bird - now driving for Jaguar - declared the winner.

Speaking less than 48 hours after the crash in a video message on Mahindra's official handle Twitter, Lynn said he is ready to put the incident behind and focus on the next round in Rome in April.

"Hi everyone, I just wanted to send out a little message after Saturday evening's race," he said. 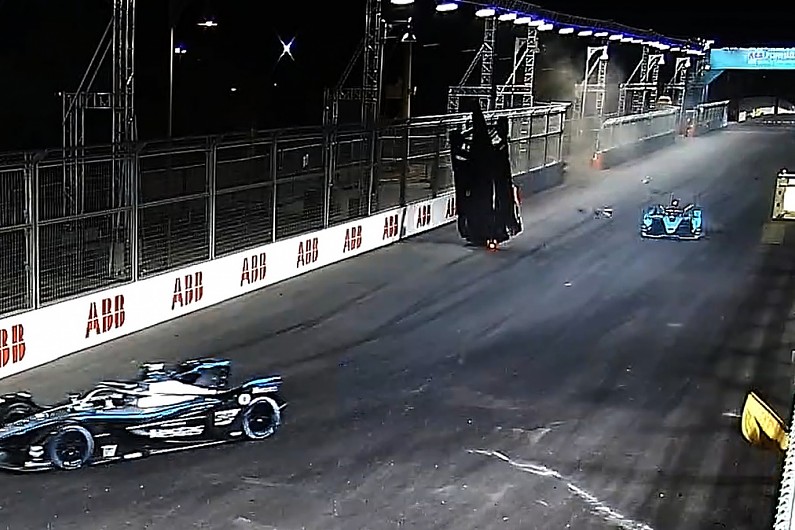 "Safe to say it was a little bit more of a dramatic ending than I was hoping on having.

"But first things first, I'm a 100% fine, no injuries at all. So I'd like to say a big thank you to my team Mahindra, the FIA and also Formula E for making sure that the car I'm driving is extremely safe.

"And the second thing I'd really like to say is that a big thank you for all the messages that I've been sent, honestly really humbled by some of the things that have been said and I do appreciate it a lot.

"So from now it's just really about getting ready for Rome in a few weeks time. I want to maximise this really fast Mahindra car that I've been given and looking forward to."

Lynn failed to score a point in the Riyadh double header following a collision with Bird at the opening corner in Race 1 - an incident for which he was handed a three-place grid penalty for the following race.