Mercedes has no intention of "flirting" with other drivers over potential future race seats until it knows what is happening with its current Formula 1 line-up.

With both Lewis Hamilton and Valtteri Bottas only signing one-year contract extensions with the team, the German manufacturer could find itself exposed for 2022 if either of them move on.

But while Max Verstappen has emerged as an obvious target for Mercedes if Hamilton does not continue in F1 beyond this year, the team has played down any talk of it scouting options early.

Speaking at the launch of the new Mercedes W12, team principal Toto Wolff said that the focus was very much on continuing with Hamilton - and that is why it would not be looking at anyone else for now.

"The symbiosis that we have in the relationship, it's always that we have a mutual understanding of what we want to do in the future," he said. "And that will be also the case in the discussions with Lewis going forward.

"Max is certainly an outstanding young driver that will be on everybody's radar in the future, but we are not flirting outside before we have a clear understanding with our two drivers."

Wolff was clear, however, that Mercedes and Hamilton would not repeat what happened last year when contract negotiations dragged on during the winter.

"We have agreed that we want to pick up the discussions much earlier this year, to avoid a situation like we had in 2020 where we ran out of time and were in the uncomfortable position that there is no time left before the beginning of the [next] season.

"That's also why we only did a one-year contract: in order to allow us to discuss the future in racing and outside of racing longer. And with the right amount of time.

"What we've decided is to discuss things much earlier this year, not at the end of the season."

PLUS: How Hamilton's one-year deal opens up the 2022 driver market

Wolff said that the team was comfortable with things and had no doubts if Hamilton continued that it would be with Mercedes.

"I think if Lewis continues to race we will want to do this together. And we will discuss it shortly," he said. "And with Valtteri, we know exactly what we have and we appreciate this.

"At the same time the landscape changes with new cars, new regulations, and we've got to take the right decision for the team going forward. But that also means that we will have the discussions with our two drivers first, and then we will see where that goes." 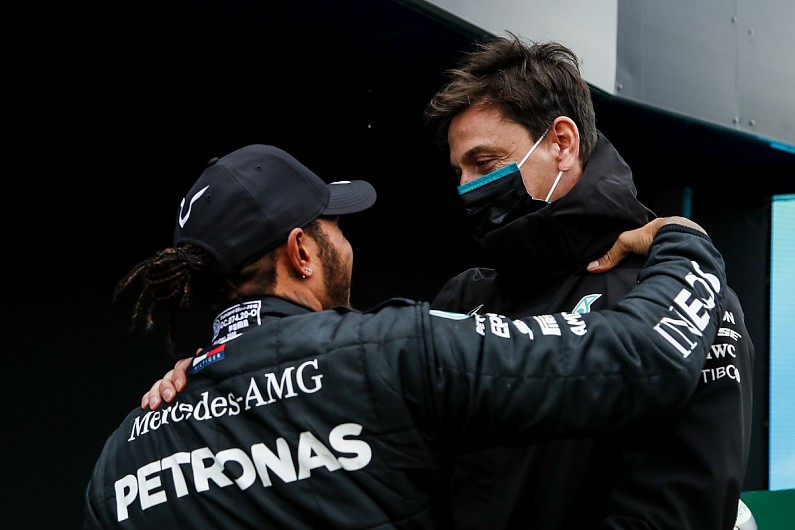 Despite Hamilton making it clear that he was not interested in committing himself to a longer term deal, Wolff said he had no doubts about the world champion still remaining in love with F1.

"No, no doubt about his commitment," he said. "First of all, he enjoys racing a lot. We enjoy working with each other. And we discussed that a lot.

"But he's absolutely right. Times change. New priorities for all of us in terms of the way we live our health. He's very passionate about his initiatives, against racism and inequality.

"And then we have this massive regulatory change in 2022, that's going to reshape what Formula 1 will be for the next few years.

"But I don't think that this plays a role, to be honest. I think it's fair enough for a driver that has won seven championships, to give himself the flexibility in his mind to decide what he wants to do in the future, whether this is racing or outside of the circus."